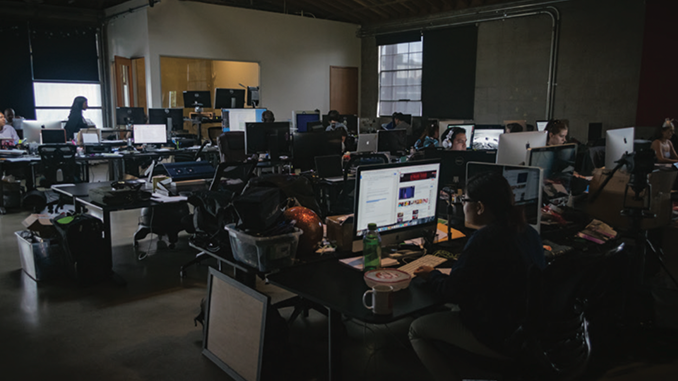 Considered one of the most watched online news shows, The Young Turks (TYT) — co-hosted by Founder and CEO Cenk Uygur and Ana Kasparian— is a popular destination for news and politics among millennials.

Produced as a live, multi-camera HDTV show from its Los Angeles-based studio, the show live streams from 6:00pm to 8:00pm ET, and focuses on news, political commentary and current affairs. They take pride in presenting a variety of viewpoints and perspectives, and also offer exclusive content to a large base of members who pay an annual subscription at TYTNetwork.com.

TYT Network has expanded from this live daily two-hour newscast on YouTube to comprise a cluster of online specialty channels, other social media outlets and additional programs.

This is a dramatic increase from its humble beginnings in 2002 as a Sirius XM satellite radio show. The Young Turks began live streaming in 2005 and earned the distinction of being the first talk show to be delivered via a live online stream. Since then, the network has generated over six billion lifetime views. And this digital media operation is growing exponentially.

Today, growth flows in all directions, including the amount of programming it produces for over a dozen different ad-supported online channels and the many digital media platforms that carry it.

As part of their intensive, round-the-clock media operation, The Young Turks live two-hour newscast must be chunked and repackaged into video segments of varying lengths for on-demand viewing. Ten clips can easily become 30 clips with all the formats, versions and derivatives needed by their distribution platforms, which include: YouTube, Facebook, Twitter , Vimeo , Roku , Pluto.tv , Hulu , Amazon.

Because this high-volume content must be edited, branded, and transcoded into numerous iterations for multi-platform distribution, TYT Network reached a breaking point in 2016 requiring them to further grow and expand by moving the operation to an automated, file-based workflow.

Specializing in news, rapid turn around is essential to TYT’s business model.  For this reason, TYT Network depends upon automating the processing and distribution of a high-volume of media files. Since most of their deliverables appear on online and social media sites, TYT Network needed a solution that would assume the task of uploading media and metadata to these outlets.  They chose Vantage Media Processing Platform. Based on the operational benefits they realized, Vantage platform allows them to scale and build-out the solution to meet their ever-changing needs.

The Vantage platform consists of a family of products and options that allow the TYT’s the flexibility to customize the workflow to their unique needs using the following:

Configured as an integrated component of the Vantage Media Processing Platform, the Social Media Connector acts as a news pipeline, transcoding and uploading roughly 50 clips per day to each of the social media sites.

With this option, the pace of news production and publishing is seven times faster than before Vantage, and this accelerated productivity supports TYT’s mission and growth. While both media and metadata are uploaded directly to YouTube, TYT Network is in the process of expanding its footprint to include automated posts to Facebook, and Twitter.

When the planned updates are completed, the platform will automatically perform quality control and publish finished news segments to each social site. Since metadata allows online users to find the content, it’s vital to the company’s revenues.

Without automated processing of this high-volume media workload, editors would have to upload each story and manually enter the metadata for each social media site through the browser portal. This time can now be spent on creative endeavors, such as preparing the next story.

For TYT Network, shifting to the Vantage intelligent, automated, file-based workflow has yielded many operational benefits including:

To get more information about Telestream or products mentioned, visit our website.

More information about The Young Turks (TYT) Network can be found here.