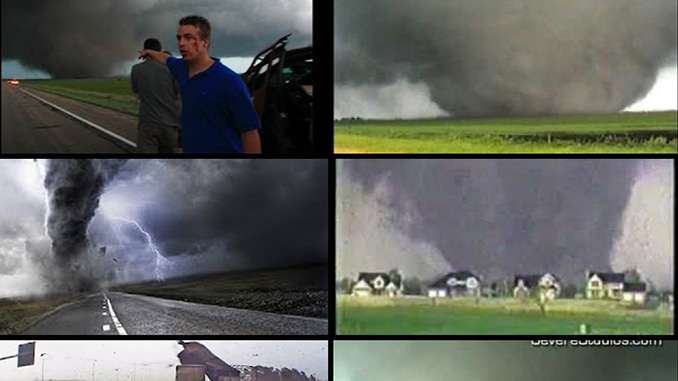 Kory Hartman is part of SevereStudios, a midwestern company that tracks extreme weather events and has over 400 storm chasers around the US. He took time during his busy storm season to answer a few questions for us.

1.  How did you get into this type of work? It’s not exactly your normal everyday career choice.
The founders of SevereStudios became interested in storm chasing as broadcasters who usually covered the aftermath of severe storms. We wanted to be able to see first-hand the type of weather that could wrap semi trucks around trees and shove a straw through a telephone pole. The first step was to be trained by the National Weather Service as a spotter, someone who usually gets posted in a specific part of their home area and stays there. From there, we became more and more “mobile” and learned from other storm chasers. Now, we could possibly travel over 1,500 miles in a day to chase severe weather.

Most storm chasers do it as a hobby and have other “real” jobs. There are only a few people who consider storm chasing their full time gig. However, those usually have major corporate sponsorships, national TV shows, or backing from a university or other research entities. At SevereStudios, we combined our broadcasting experience with our storm chasing interest to create the leading company that provides live breaking weather video to local TV stations and national news networks.

2.  How do you decide what storms will make for interesting footage?
We try to intercept large, isolated supercell storms that we think will produce the largest hail, strongest wind, biggest tornadoes. We can forecast the best area to be in ahead of time, but once things get going, nobody knows EXACTLY what storm will produce the best (or worst) weather, so there’s a lot of luck involved. Once we find what we are looking for, we concentrate on keeping the stream camera on the tornado and following it.

3.  Besides Wirecast, what kind of gear does it take to be a storm spotter or chaser?
It runs the gamut. Some people go “old school” and take minimal equipment. Others have full digital production studios inside their SUV with hail guards welded to the roof and 15 antennas. The standard setup includes a laptop, celluar internet card, mini-DV camcorder on the dash, GPS receiver, and radar software. While we are uploading live video with Wirecast, we are downloading weather data.

4.  Any tips for our readers? Settings, rigs, mounts, remotes etc.
A suction cup window mount is absolutely essential for streaming live from your vehicle. Filmtools.com has a great selection. Even though we stream using a very low bandwidth setting (usually less than 100kbps), we use a decent camcorder on the encoding end to produce a better picture on the viewing end. We like the Sony HC-5, 7, and 9 series a lot. An external antenna and booster for the wireless card also helps a ton by keeping the cell signal strong.

5.  What about Wirecast made it your choice for your work at SevereStudios?
We started using Wirecast for producing our “moderator feed”, where we give play-by-play of what we are seeing from the field on multiple live streams, give coverage of Tornado Warnings, and broadcast radar pictures. We needed chroma-key, professional-looking titles, split screen, and picture-in-picture. We used the Desktop Presenter to bring the chaser feeds and radar into the broadcast.

In the car, Wirecast allows us to change titles and type in messages to the viewer like “Rotating Wall Cloud” or “Tornado Just Lifted” in real time. Plus, simply hitting CTRL+B to broadcast is easy to do with one hand! It’s also easy to change broadcast settings and reduce frame size, frame rate, or bitrate in a few seconds if we cross into bad cell coverage.

6.  Have you ever found yourself in the wrong place at the wrong time? And did you get it on film?
In 2008, we were caught by a tornado near Little Sioux, Iowa. Rain was completely wrapped around the tornado and there was no visibility. Suddenly large tree branches started hitting our car. Just then, the tornado emerged from the rain and went right over us. Winds estimated around 110mph whipped over our car, smashed corn stalks, rocks, and other unidentified objects into us, blew out the back window, turned the car sideways on the road, and tried to push us into the ditch. At that exact moment, our media partner, WOWT-6 in Omaha, took our phone call and video stream on the air. Thus, we became the first people to stream live from inside a tornado. The high-quality video from our dash cam was shown on news shows around the world the next day.

7.  What’s the hardest thing about live streaming severe weather events?
Equipment failure! Storm chasing requires extreme multi-tasking and any technical problems can be very distracting during a chase. Laptop crashes, camera problems, cellular issues and power inverter deaths can ruin your day pretty quickly. Fortunately, over the years, we have invested in equipment we know is reliable and Wirecast falls into that category. Wirecast begins broadcasting instantly and all your settings are saved when you close the program, making it easy to fire up the stream the next time it’s needed.

8.  What’s the most fun for you personally about running SevereStudios?
I get to see new high-quality storm video before anyone else in the world, besides the chaser that shoots it! We have a very talented team of storm chasers and I enjoy working with them.

9.  We noticed you have several partners, including CNN. Do they use your footage a lot?
A lot of our footage has been used by CNN this year and The Weather Channel has used our live streams quite often as well. This season has produced some very photogenic storms and we have been in the right place at the right time. In March, our close-up footage shot by Andy Gabrielson near Hammon, Oklahoma was seen on networks as far away as Croatia and Central America.

10.  What’s next for SevereStudios? Going international, different types of storms?
We continue to develop new ways to get more eyeballs on our content. This includes new partnerships and syndication of our live streams. We also keep our finger on the pulse of new technology and can’t wait to see the new things that are released before next storm season.