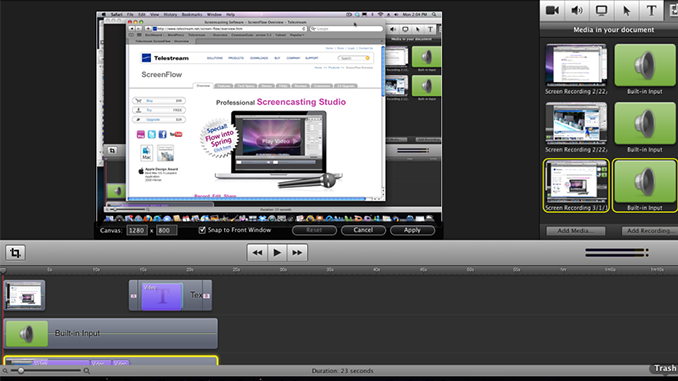 There is some debate among screencasters about what’s better: full-screen capture or partial-screen capture. Full-screen capture is just that: your entire screen gets recorded, then you crop and edit in post-production. Partial-screen capture requires that you size and position a “viewport”  or recording window prior to recording, and only things in that window get recorded.  I have seen this topic come up in our forums, and also as a feature request, so I thought I’d take a moment to explore some of the reasons ScreenFlow is the way it is.

ScreenFlow, by design, captures the entire screen during recording. You can then crop to your desired screen size or window size afterward.  But capturing the full screen is a very deliberate product feature in ScreenFlow, and there are a couple of reasons for that:

1) Full-screen capture enables certain other capabilities: The very nature of ScreenFlow is that it is built around Mac OS technology. ScreenFlow captures the entire screen which allows it to take advantage of certain features specific to the way the Macs handle graphics – features that otherwise wouldn’t be possible if it only captured partial screen. ScreenFlow’s ability to highlight a foreground window is one example of a feature enabled by full-screen capture.  Using a different technology would mean losing some major features in ScreenFlow.

2) Full-screen capture requires less pre-planning: With full-screen capture, you’ll often end up spending less time planning your screencasts prior to recording, and more time doing edits during post-production. But, in my opinion, it’s a lot easier to spend time zooming and cropping in post-production, than it is to re-record whole segments upon realizing a particularly important item on screen did not get recorded!

3)  Full-screen capture gives you a versatile “master” recording. Recording the full screen gives you breathing room to change your mind after you’ve recorded, or use the entire video at a different size later, without having to re-record. For example, say you create a video specifically for a 320 x 240 output. Using a partial screen recorder, you’d set your window at that size, then record, then you’d have your specifically-sized video all ready to go after recording. But what if you later decide to use that video as part of a different HD project? You’ll have to re-record your video at a bigger size, or risk inserting a very low quality/low resolution video into your project. If you had captured it full screen, you would have the flexibility to crop it and create a 320×240 video, and then use that same recording at a different size in a different project, saving a lot of time and hassle.  In other words it’s creating a high resolution “master” capture that you can then export to other sizes and codecs as needed.

Some may say they prefer partial-screen capture because that’s what they’re used to using.  OK, have fun with that, while the rest of us enjoy the freedom of full-screen capture 🙂