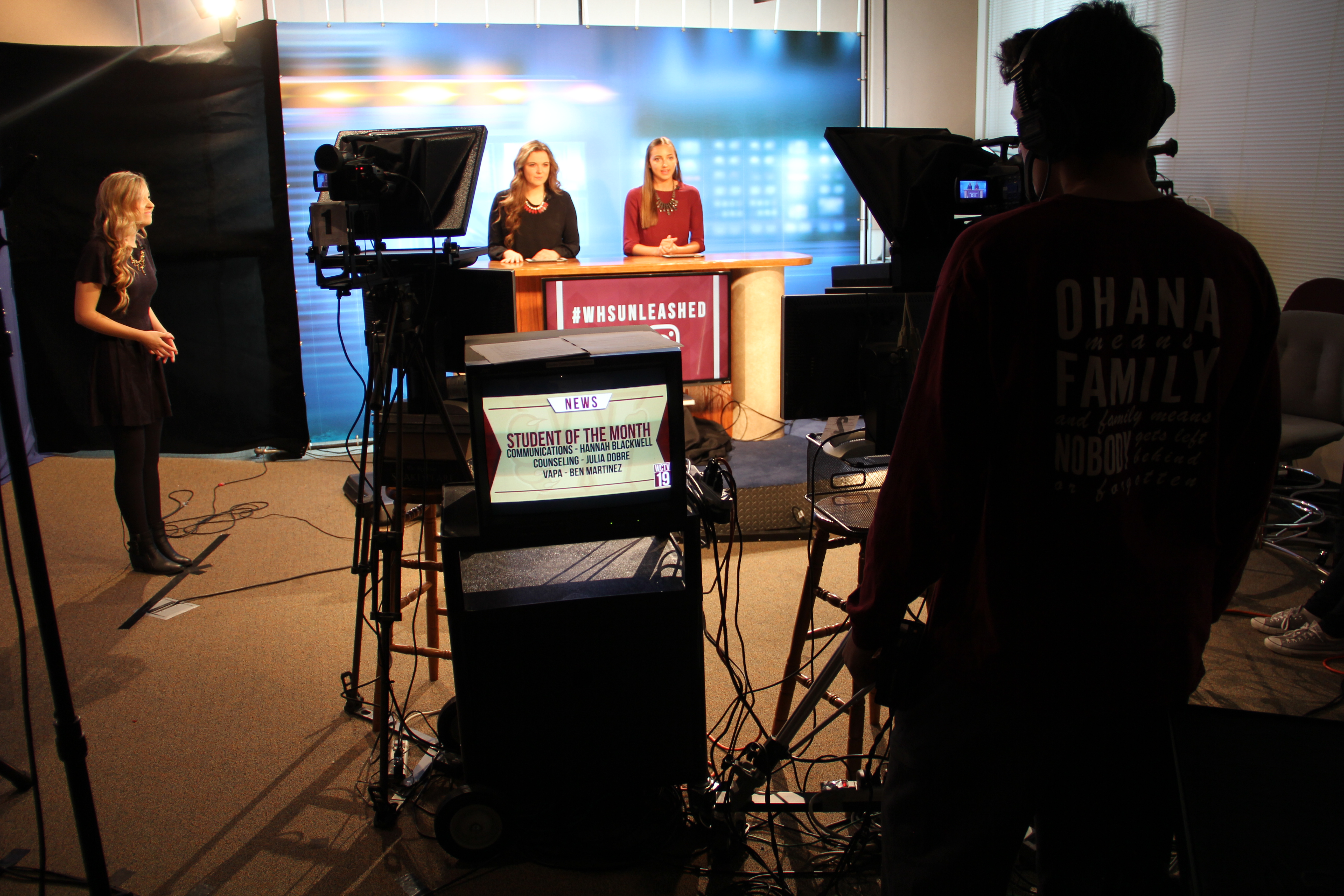 The broadcast media program at Whitney High School, a public high school in Rocklin, CA, stands out as one of the most impressive and successful programs of its kind in the country. Using Telestream’s Wirecast live video streaming production software, the students produce a 15-minute daily newscast, that features news, sports and lifestyle segments. Called Unleashed, the award-winning program has now expanded into a full-fledged community television station, branded as WCTV19, which is watched on the school’s campus-wide TV channel, as well as on two local cable channels, and on the school’s social media outlets.

“I want our students to develop classroom-to-career skills, and to get a feel for every aspect of broadcast news production in a very professional atmosphere. This program is designed to teach them broadcast journalism skills, and then apply those skills to actually producing all of the features and content that we need to make Unleashed a professional looking newscast,” explains Ben Barnholdt, Teacher/Director of the Broadcast Media Program at Whitney High School.

As an all-in-one live production and streaming system, Wirecast is now central to the school’s broadcast studio and remote production workflow and distribution. By continually expanding and upgrading their facilities, WCTV19 now looks like a professional television station, complete with a studio with a news set, HDTV studio cameras, a teleprompter, microphones, and a bluescreen background. During the production, a student crew runs the cameras and teleprompters in the studio. In the control room, a separate student crew handles the technical execution of the show.

While Wirecast integrates the functionality of video production switcher, Barnholdt has one student switching the four camera feeds using a third-party production switcher. Then that switcher’s output flows in real-time into Wirecast where the show’s finishing touches are added.

“Wirecast is a very user-friendly program that our students pick-up quickly, including how to bring in media files, such as graphics and video clips, from hard drives. Because of its many pre-sets, our Wirecast workflow is fairly automated, and we can now have a show put together and ready to roll in just 40 minutes,” says Barnholdt.

WCTV19 streams to many online and social media destinations via ESE Networks, a CDN and Telestream partner. Using the hashtag #whsunleashed, any student in the school can post pictures and videos to social media, such as Twitter and Instagram, that the Unleashed team can aggregate. They capture on-screen graphics and video clips of interest from their social media sites at very high quality using ScreenFlow from Telestream. These assets are moved into Wirecast, which keys them into the bluescreen background on-set.

“Wirecast enhances our show by allowing us to chromakey news graphics and videos into the blue screen behind the anchor desk. It also makes it easy to display CG text and lower-third supers, and add transitions and effects, all from a single user interface,” he adds.

Data displays, such as weather and sports graphics, are created on separate laptops using Adobe PhotoShop and Illustrator. For each daily show, students update key data, like temperatures and scores, without having to recreate their many graphics from scratch.

Another student then uses NewBlue Graphics software on a separate laptop to take those static graphics and animate them quickly and professionally to make the show more visually dynamic. Once the graphics are ready to go, they’re transferred over an NDI video over IP network and saved on the Wirecast laptop for playout during production.

Through a Go Fund Me campaign and a technology grant, the program recently acquired a new 25-foot broadcast production trailer that’s pulled by a pickup truck. The trailer makes it faster and easier to get the student crews and the equipment out to remote sites to produce live-streamed shows. Recent remote productions include: live-streaming football from the high school’s stadium and many special community events from Rocklin and neighboring Roseville, CA.

“Our new broadcast trailer uses the same Wirecast-driven workflow that we use in our studio control room. In this way, I only have to teach the students one way of working, whether they’re in the studio or working on a remote, like our football games. And all of our programming shares the same look and feel, and overall production quality,” says Barnholdt.