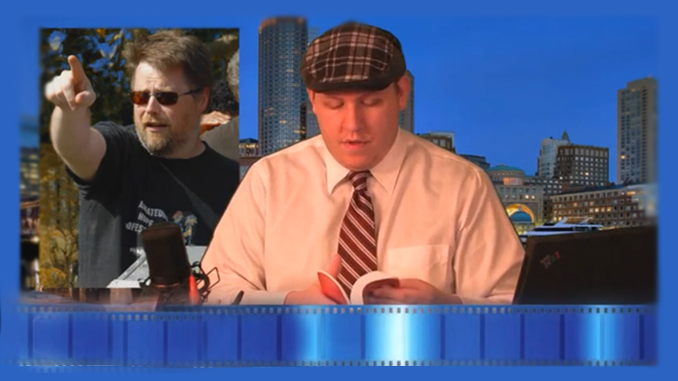 Nic, Welcome to The Screening Room. Thanks for joining us for some questions. First tell me about FilmSnobbery.com. What is it that you do?

a website dedicated to helping independent filmmakers promote their movies and find their audience.  We cover film festivals across the globe to find out what new indie films are being showcased, and review independent films that a lot of other sites pass over.  We have a group of talented writers on our site that cover a variety of topics including retro films, cult and midnight movies, and even the theaters themselves.  Fans have the ability to friend each other on the site and carry on their film conversations beyond the web shows and articles.

Wow, It sounds like an active community there.  What are some of the ways you reach out to your members?

We do several things to engage with filmmakers and fans of film including our live broadcasted interview show FilmSnobbery Live! every Tuesday night at 10PM EST, and our other audio show Things I Didn’t Learn In Film School, as well as our syndicated audio show Film Courage hosted by David Branin and Karen Worden.

A live show sounds like a great fit for the topics you are covering. It sounds like something you intended to do for a while.

It was late October of 2009 when we first decided to eschew our pre-taped show in lieu of a live broadcast format.  We started to line up some interviews with some great talent in the independent film world, activated our account on UStream.com, and went to work.

What were some of the pitfalls you ran into with setting up a live show?

I am a former IT professional.  I found that there was a lot of technology available out there to help me in my quest to create a live show where I could highlight the indie film world. But like the indie film world I found that a lot of this technology was both expensive, and required a good deal of experience to use.  I needed a solution that was not only inexpensive, but also allowed me to work with a small crew who could learn the systems quickly.

So this is when you found Wirecast?

Yes.  It looked like using Wirecast as the broadcast switcher and Ustream as the streaming host, we needed nothing more than a cheap 8-channel audio mixer, a borrowed boom mic, a couple of cheap HDV cameras, and a PC that I built myself specifically to use for this endeavor to be able to put together FilmSnobbery Live! and bring it to a worldwide audience.

What are some of the features that you were looking for when you found Wirecast?

I scoured the web for an application that could handle some simple needs and wants that we were looking for.  We wanted something that could do live lower-thirds that were customizable, green screen support (something we used quite often in our pre-taped shows), the ability to shoot in HD via their HDV plug-in which was compatible with our two Canon HV30’s that we used to shoot the show with, and the functionality to record to a hard drive for easy editing and/or uploading right to the web.  Wirecast did all of this and more.

And this saves you time?

Now our post-production time is reduced from days to hours (which our guests LOVE since we can highlight their interviews in a much more timely manner).

Saving time is great. What else does Wirecast add to your Live broadcast?

Our boring black backdrop is now whatever we need it to be with the use of our green screen and Wirecast’s integrated (and rather robust) chroma key feature.  The ability we have to customize the look and feel of our show by importing other clips and trailers adds a real dynamic to how our show plays.  All of these features and more allow us to play with the big boys when it comes to internet live broadcasting.

And how easy was it to learn how to use Wirecast?

I was nervous at first about getting used to the new software, but it was actually very easy to use and even when I did have some issues, their forums have been very informative and I was able to sort out my issues fairly quickly.

It sounds like using Wirecast has been a good experience for you.

Yes. And we’re not the only ones seeing the difference!  Since switching to Wirecast as our broadcast solution (as well as paying for UStream’s Watershed platform to prevent anymore downtime or crashes), our audience has complemented us numerous times on the new look of our little show.  Our audience continues to grow weekly, and now we’re not embarrassed to have our videos seen alongside some of our online contemporaries.  Gone are the days of blurry pixelated images and drab backgrounds.  Now our audience gets to experience our show in high definition, with multiple cameras, and even if they missed it live, they can watch the show in our archives just a few hours after the show ends!

Great. If someone wants to find out more about Film Snobbery.com or tune into Film Snobbery Live where can they do that?

Here are samples of some recent shows:

Episode 22 with Chris Jones (author of The Guerilla Filmmaker’s Handbook):

Thanks, Nic, for joining us in the Streaming Room.